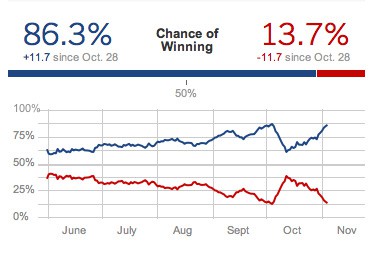 NYT number-cruncher Nate Silver says national and state polls on Sunday are coming into agreement with one another as we round the final curve of the 2012 presidential horse race, and showing a marginal advantage for Obama not unlike that which he enjoyed before his first disastrous debate against Mitt Romney.

Silver also looks at the popular vote and its relationship to the electoral vote:

Mr. Obama would be almost certain to win the Electoral College if he won the popular vote by a percentage point or so.

Instead, the model estimates that Mr. Romney would need to win the national popular vote by about one percentage point to avert a tossup, or a loss, in the Electoral College. A tied popular vote, as Mr. Romney’s better national surveys now indicate, would likely yield an unhappy outcome for him.

But with national polls now showing a slight edge for Mr. Obama, these outcomes have become less likely. If Mr. Romney wins the popular vote, it may be only barely, and that might not be enough for him to win the Electoral College.

CNN says the race is a dead heat. "Forty-nine percent of likely voters questioned say they support the president, with an equal amount saying they back the former Massachusetts governor. The poll is the fourth national non-partisan, live operator survey released Sunday to indicate the battle for the presidency either a dead heat or virtually tied. A Politico/George Washington University survey has it tied at 48%; an NBC News/Wall Street Journal poll indicates Obama at 48% and Romney at 47%; and the latest ABC News/Washington Post tracking poll puts Obama at 49% and Romney at 48%."