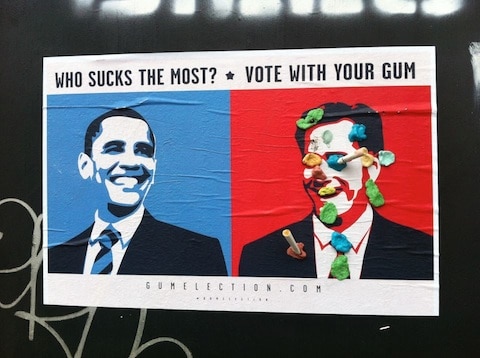 PHOTO OF THE DAY: Voters in NYC's East Village stick it to Romney.

Entering the final weekend of the election it seems that most of us are sick and tired of hearing about it, but with each candidate laying out their final cases we are almost done with election hell. As we head toward Tuesday, ThinkProgress warns us that the Romney campaign will take whatever (possibly illegal) measures it can to win. Some of that certainly includes blatant vote pandering to minority groups. At least Romney has Mr. Burns in his corner. No word yet on Smithers.

Try as Romney might he just can't shake the cloud of Mormonism that follows him and he seems pretty pissed about what people think of the religion. 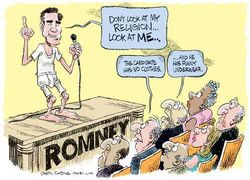 Nate Silver has Obama's chances of victory up to 80 percent now.

Aussie Swimmer Ian Thorpe has a new autobiography out and that means that he is in for another round of questioning about his sexuality. Joy Behar, a long time supporter of gay rights, is like many of us in that she just does not understand GOProud. Chris Kluwe continues to show that he might be the smartest player in the NFL. Check out his interview in OC Weekly.

On Tuesday we not only find out about the fate of the national election but also the fate of four gay marriage-related initiatives on ballots across the country. A beer brewed in Washington State toasts to marriage equality as Marylanders United for Marriage Equality release their final ad. Also a couple of statements of definite anti-gay sentiment. First from Washington D.C., where the Archdiocese has released an ad attacking gay marriage. And Jamaica continues to be a very difficult place to be gay.

Check out this video of a woman raised by two dads singing President Obama's praises.