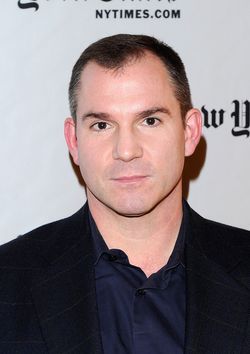 At least four people emailed over the course of the evening to pass along Frank Bruni’s latest New York Times column, “A Father’s Journey on Gay Marriage.”

I thought, “Well, this better be good…” It was better than good; it was great.

After years of skirting the issue of his sexuality with his father, a father who stayed silent after Bruni’s late mother told him then-younger Frank’s secret, Bruni recently had lunch with his dad to find out how he came to accept him.

Here is an excerpt from a piece worth reading twice. The scene picks up with Bruni’s father explaining why, even after knowing the truth, he said nothing:

“It was just so unusual to me,” he recalled, groping for the right word.

He’d heard it said that gay people were somehow stunted, maybe even ill.
But that made no sense to him, because he was confident that I was
neither of those things.

He’d heard it said that peculiar upbringings turned children gay. “I
thought about it a lot,” he said, “and I came to the conclusion that it
had to be in your genes, in you, because I couldn’t think how the
environment for you was any different than it was for your two
brothers.”

He said he worried that I was in for a more difficult, less complete
life than they and my sister were. I asked him why he’d never broached
that with me. He said that it would have been an insult — that I was
obviously smart enough to have assessed the terrain and figured out for
myself how I was going to navigate it.

It’s a touching and telling people, particularly the elder Bruni’s hypothesis on why some American remain hesitant to accept gay people. “I’m convinced that people who don’t accept gays just don’t
really know any of them.” Smart man.