Daniel Hernandez, the gay intern credited with saving the life of former Rep. Gabrielle Giffords after she was shot in the head in Tucson, is publishing a memoir. 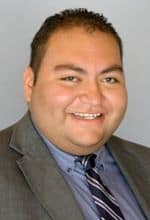 Hernandez says he was never comfortable with that spotlight but decided to do the book for a very specific reason:

As time passed, Hernandez – who is now 22, a graduate of the University of Arizona, and a member of the governing board of the Tucson school district where he attended public school – realized that he would be interested in writing a book focusing on his public service. “I am involved in Latino and LGBT issues, and there aren’t a lot of Latinos and LGBTs featured in novels or books,” he says. “It was the fact that these groups don’t have many role models that drove me to even consider writing about myself. As a Latino person and now as a young elected official, I’ve faced some big challenges, and I want young people and adults to know that they need to overcome challenges and become involved (in) their communities.”

Previous Post: « George Takei Talks About His Lunch Date with Donald Trump: VIDEO
Next Post: Hero at the Lancome Counter at Macy’s: VIDEO »