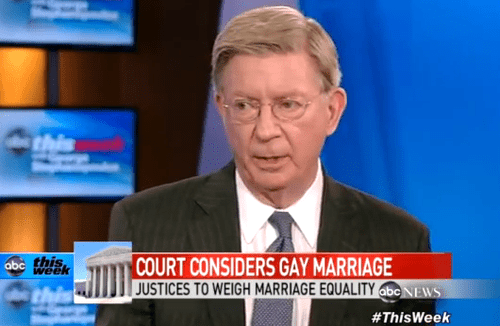 From today's Politico survey: "A full 63 percent of 18-to-29-year-olds backed marriage…It dropped off to 36 percent support among both 30-to-44-year-olds and 45-to-59-year-olds. Only three in 10 seniors supported gay marriage."

Asked about such numbers and the Supreme Court's decision to hear two cases on marriage equality, journalist George Will broke it down like this: all the seniors brought up pre-gay rights are kicking the bucket.

"There is something like an emerging consensus," he said on ABC News' This Week. "Quite literally, the opposition to gay marriage is dying. It’s old people."

Watch video of Will summing it up AFTER THE JUMP.