The words "Kindergarten" and "dead" should never be near one another. All school shootings are tragedies, but there is something particularly soul-crushing about gun violence that victimizes the beautiful, helpless, and idealistic innocence of the youngest members of the next generation. They should be learning to craft sentences and expanding their imaginations with Jake and the Neverland pirates. They should not be the victims of a senseless lunatic who used this country's lax gun enforcement laws to execute his insane agenda. 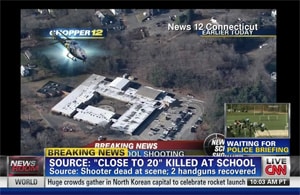 I know no one in Newtown, Connecticut, but some of today's victims were the same age as my eldest nephew. I can't imagine what their moms and dads are going through.

Unfortunately, I can imagine what's going through the minds of the strategists at the National Rifle Association (NRA). For decades, the NRA has raised and spent millions executing a policy that Charlton Heston explained best: "You can have my gun, when you pry it from my cold, dead hands." The organization says it supports sensible gun control, but really it doesn't. It has opposed every gun control measure at the state and federal level. It has challenged several of them in court, winning a few spectacular cases at the conservative Supreme Court. It has overturned several of them on election day, and threatened elected lawmakers with harsh payback if they vote against them.

In some ways, the NRA is like any other powerful lobby, winning cases here, passing laws there, and raising money for friendly politicians. But, there's a difference between the NRA and, say, the Chamber of Commerce. The NRA deals with guns. It deals in death.

The organization's strategists have done a remarkable job turning the "let's not politicize a tragedy" canard into an iron barrier against regulation by going beyond platitudes and taking a rich political tradition of civil libertarianism and radicalizing it. They don't like the government telling them what to do, what to eat, and what to kill. They take pride in the nostalgia and go-it-alone mentality of gun ownership and the American frontier, and because this tradition is so deeply engrained in certain segments of the population, the NRA can tap into an almost endless cache of civic indignation whenever the state or federal government does something.

The truth of the matter is that radical libertarianism has acted as a shield against any real national discussion about sensible gun control. The moment the topic is raised, the notions of propriety and silence in mourning spring up as a pretext. It allows conservatives to ignore statistics, sociology, and reality. We know that the majority of mass killers in the United States use weapons that they acquired legally. So, we should toss the theory that gun control only burdens hunters and not the lunatics who are intent on getting a gun anyway. We also have evidence that gun availability is linked to high murder rates and that gun control is linked to low gun deaths. To the NRA, none of this really matters because a bloated, ahistorical notion of radical individual freedom has taken over the thinking centers of the American brain.

It cannot be that the moments after 20 children are killed is too soon to discuss what to do about it; if anything, it is too late. What's really going on is the siren spell of radical libertarianism, a hex cast to confuse a population sympathetic to freedom yet unaware that the NRA wants this "machine of war" on the streets.