BY BILL HUSSUNG and MISHARA CANINO

A first-of-it’s-kind lawsuit charging a prominent ex-gay leader with consumer fraud for offering to “cure” homosexuals will be settled in a New Jersey court. However the court may rule, we can state from personal experience that the allegations made in the complaint brought by the Southern Poverty Law Center match our own personal experiences with the man at the center of the lawsuit. 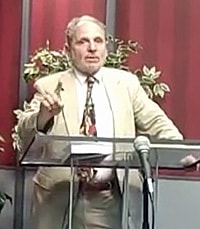 Arthur Goldberg is the founder of Jews Offering New Alternatives for Healing, commonly known as JONAH. Goldberg has made no public comments about the substance of the lawsuit other than to issue a press release condemning the suit as an attack on free speech. But the issues at the heart of the lawsuit, the therapy practices he promotes as a “gay cure,” were the subject of hours of videotaped interviews we conducted with Goldberg several years ago. Those interviews ended up being featured in our documentary Chasing the Devil: Inside the Ex-Gay Movement.

In the lawsuit, four gay men claim that Goldberg’s organization charged them for phoney counseling sessions that involved pillow beating, trash talking their mothers, and nudity with other men to switch their sexual orientation. All of the claims match what Goldberg told us on camera, and showed us during the filming of our documentary. We can’t tell you if this amounts to consumer fraud, but we can tell you that the charges ring true.

We first met Goldberg at our apartment on the upper west side of Manhattan after he refused to give us the address of his organization, saying he had to get to know us before releasing such sensitive information. “We’re somewhat afraid of the gay activists, they can make things difficult for us, and that’s why the address isn’t listed,” Goldberg explained. Several hours later, satisfied we were really documentary filmmakers and not gay activists, Goldberg agreed to allow us access to his facility, therapists and some patients. It turns out the JONAH headquarters are inside a Jersey City building fronting as a Russian Jewish art museum. 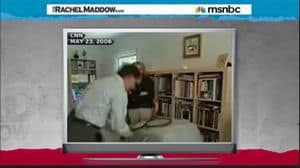 In the consumer fraud lawsuit Benjamin Unger claims he was ordered to beat a pillow with a tennis racket while shouting “Mom! Mom! Mom!” That’s a practice Goldberg was eager to have us film when he put us in contact with Baltimore based conversion therapist Richard Cohen. Goldberg works closely with Cohen and refers many of his clients to him for counseling. Cohen had a patient demonstrate the practice for us. Goldberg told us the treatment was based on the idea that homosexuality comes out of family dysfunction, “there is a very clear pattern of what causes homosexuality, over involvement with the mother is a major factor.” In the lawsuit Unger says the treatment greatly damaged his relationship with his mom. No doubt. Goldberg listed other possible causes as, “child sex abuse, same sex peer abuse, body image wounding, and defensive attachment to the father.”

Richard Cohen is not named in the New Jersey lawsuit but a source says he was involved with treating the plaintiffs. Cohen practices a form of touch therapy that involves caressing and holding the patient on his lap. In the lawsuit against Goldberg it’s alleged that young men were instructed to remove their clothes and stand naked in a circle with an equally nude counselor. This tracks with what Goldberg and Cohen told us about the importance of male bonding and body image issues. “ Body image problems are confidence problems, a body wound is a sense of feeling different,” is the way Goldberg put it. It’s worth noting that Cohen is a former moonie who married his wife at a Unification Church mass wedding at Madison Square Garden. He was disciplined by the American Counseling Association and ultimately kicked out of the organization. Goldberg is a disbarred lawyer who was convicted of three counts of mail fraud and served six months in a federal prison.

At the heart of the potentially ground breaking lawsuit against Goldberg is the argument that conversion therapy promotes the idea that being gay is a choice, a position gay activists believe promotes anti-gay bigotry. ” There is no such thing as homophobia, homophobia is a made up term, a way of making the average American feel guilty,” was how Goldberg responded to a similar argument in our film. We’ll see if it’s the same argument he makes in court.

During the course of our filming with Goldberg he said a lot of surprising things. But perhaps nothing was as surprising as the revelation that he has an openly gay son, “I don’t want to embarrass my son, but yes, he doesn’t like to be publicly identified, it’s not just my son, it’s a lot of members of my family.” It will be interesting to see if any of them get called to testify.

Watch the trailer for their documentary Chasing the Devil: Inside the Ex-Gay Movement,
AFTER THE JUMP…

Bill Hussung and Mishara Canino are award-winning documentary filmmakers whose work has appeared on cable television and at film festivals across the country.  Their awards include the Edward R. Murrow Award for Investigative Journalism. Chasing the Devil: Inside the Ex-Gay Movement is distributed by IndiePix Films. Bill was co-creator of the MTV series, MTV Juvies.  Clips from Chasing the Devil are available at www.boompotatofilms.com.