NASA announced today that the site where twin agency spacecraft impacted the moon Monday has been named for the first woman (and lesbian) in space, astronaut Sally Ride: 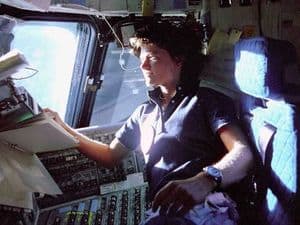 Last Friday, Ebb and Flow, the two spacecraft comprising NASA's Gravity Recovery and Interior Laboratory (GRAIL) mission, were commanded to descend into a lower orbit that would result in an impact Monday on a mountain near the moon's north pole. The formation-flying duo hit the lunar surface as planned at 2:28:51 p.m.

"Sally was all about getting the job done, whether it be in exploring space, inspiring the next generation, or helping make the GRAIL mission the resounding success it is today," said GRAIL principal investigator Maria Zuber of the Massachusetts Institute of Technology in Cambridge. "As we complete our lunar mission, we are proud we can honor Sally Ride's contributions by naming this corner of the moon after her."

The impact marked a successful end to the GRAIL mission, which was NASA's first planetary mission to carry cameras fully dedicated to education and public outreach. Ride, who died in July after a 17-month battle with pancreatic cancer, led GRAIL's MoonKAM (Moon Knowledge Acquired by Middle School Students) Program through her company, Sally Ride Science, in San Diego.

Along with its primary science instrument, each spacecraft carried a MoonKAM camera that took more than 115,000 total images of the lunar surface. Imaging targets were proposed by middle school students from across the country and the resulting images returned for them to study. The names of the spacecraft were selected by Ride and the mission team from student submissions in a nationwide contest.

"Sally Ride worked tirelessly throughout her life to remind all of us, especially girls, to keep questioning and learning," said Sen.  Barbara Mikulski of Maryland. "Today her passion for making students part of NASA's science is honored by naming the impact site for her."

Sally Ride's posthumous coming out was named by Towleroad as one of "the 50 Most Powerful Coming Outs of 2012" in a list we published this morning.

Check out all the names HERE.