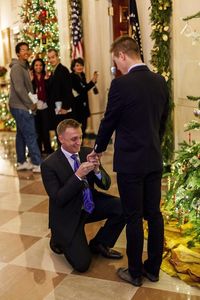 PHOTO OF THE DAY: A gay proposal at the White House.

With just a few days left in the year, Towleroad presents the "50 Most Powerful Coming Outs" of the year. It was a huge year and a diverse group!

Also a couple in Columbia has stirred up some drama after they unveiled their gay nativity scene.

With the nation still mourning the tragedy in Newtown, Focus on the Family's James Dobson has added his voice to the few disgusting wingnuts who have blamed the shooting on the school's lack of faith.

Someone possibly even crazier than Jim DeMint has been chosen to replace him in the Senate. Tim Scott, or the "Chick-Fil-A Televangelist", will be filling his vacated seat.

Check out the first full-length trailer for Star Trek: Into Darkness.

DJ Earworm has his yearly mash-up of the year in pop music ready to go. And check out Adam Lambert covering Madonna and Donna Summer at VH1 Divas.