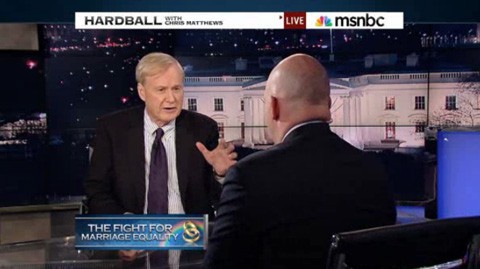 Chris Matthews confronted Log Cabin Republican Executive Director R. Clarke Cooper about the GOP's lagging support for same-sex marriage but had to pause his strategy for a moment after asking Cooper why he didn't oppose Karl Rove in 2004 when he was pushing anti-gay ballot measures.

Asked Matthews: “Where were you then? Did you fight Karl Rove?”

“Touché. You win. You win the argument. That's a very good alibi.”

Matthews then went on to ask Cooper what gay Republicans should do to work to change their platform.

See what Cooper has to say, AFTER THE JUMP…