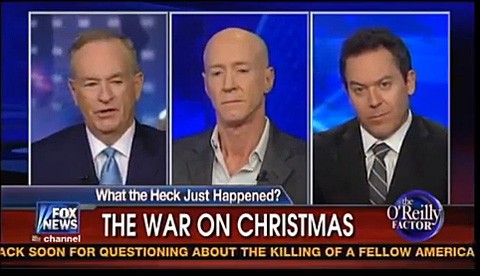 Bill O'Reilly agreed with Imus in the Morning producer Bernard McGuirk last night after he blamed abortion and gay rights for the so-called 'war on Christmas'.

MCGUIRK: The war on Christmas is very, very real, and if you ask me, in addition to some grouchy misanthropic heathen atheists it has to do – at the root of it – with two things – abortion and the gay rights agenda, because Christianity is against those things. It's subtle but that's why it's so pronounced in recent years.

O'REILLY: Hundred percent agree. I absolutely agree 100% that the diminishment of Christianity is the target and Christmas is the vehicle because the secularists know the opposition to their agenda (legalized drugs is in that as well) comes primarily from the Judeo-Christian traditionalist people.