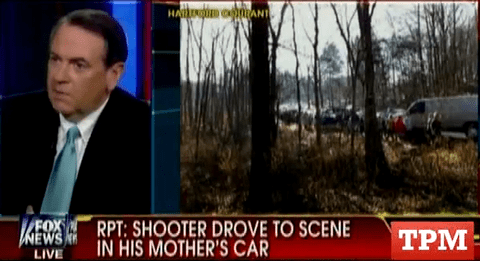 Mike Huckabee, the former Republican Arkansas governor who lost his 2008 presidential bid so he became a Fox News pundit instead, played a little game of right-wing "blame the victim" yesterday when he flat out said that a lack of religion in schools led to the horrific shooting deaths of 26 people, including 20 children, at Sandy Hook Elementary in Connecticut.

"We ask why there is violence in our schools, but we have systematically removed God from our schools Should we be so surprised that schools would become a place of carnage?" he said on, yes, Fox News.

He went on, "[W]e've made it a place where we don't want to talk about eternity, life, what responsibility means, accountability — that we're not just going to have be accountable to the police if they catch us, but one day we stand before, you know, a holy God in judgment… If we don't believe that, then we don't fear that."

Huckabee's argument is a not-so-distant cousin from that of anti-gay, evangelical radio host Bryan Fischer of the American Family Association. He suggested said yesterday that the kids killed didn't have sufficient belief in God: "God is not going to go where he is not wanted."

This is a particularly insidious brand of "blame of the victim" messaging, one that's also particularly confusing: conservatives are known to blame disasters like Hurricane Sandy on the gays, as if our hedonistic, heathen ways unleash doom and destruction, known in right-wing Christian circles as God's Wrath, onto the population at large, even God-fearing citizens. Our mere presence threatens civilization because it's an affront, and those who accept us are asking for it by turning their back on God.

And here we have roughly the same argument being used to explain the deaths of nearly two dozen innocent children who could have no deep understanding of religion, faith or a creator.