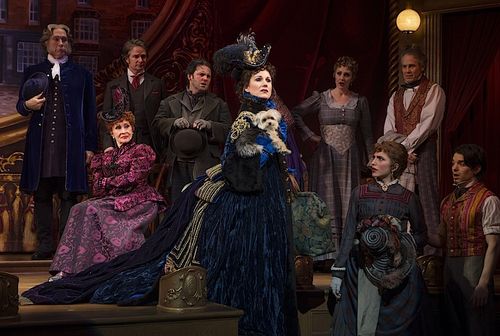 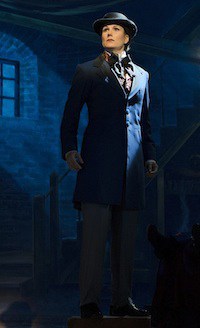 I talked to Ms. Block about her debut as a leading man.

Naveen Kumar: You wear a lot of different hats in this production,playing a male impersonator (Alice Nutting) taking on the title role of EdwinDrood and later on yet another man, himself in disguise.  What’s it like for you as a performerswitching between so many different layers of character and disguise?

Stephanie J. Block: You know when I first took the part I was actuallya little worried, I thought that perhaps the audience wasn’t going to be ableto connect with any of these characters because I was constantly shapeshifting. Especially in a play where the actors are able to break the fourthwall, interaction with the audience is so important. I thought, I’m neverreally going to get my footing and therefore the audience is never going to gettheir footing as to who these characters are. But I was very wrong.

Somehow, the way Rupert Holmes has constructed this play, the audienceengages really quickly with these music hall performers, and I think it’s verymuch because at the top of the show when we’re mingling around the audience,we’re literally sitting in the seat next to them and chatting them up. Some ofit’s fictitious, but sometimes we’re talking about the outfit they’re wearingor the day they had. So they feel like they’re watching friends up there on thestage, people that they actually know.

So it’s switched from me feeling like ‘Uh oh, how’s this going towork?’ to this really great fun because I don’t have to stay in one characterthe entire play. I get to flop around, play around, and try new things andsomehow it’s completely welcomed and the audience greatly loves it. So, I feelgreat about it now, but I’d be lying to you if in the beginning I didn’t admitthat I was like ‘Uh oh, this could be a big problem for me as an actor as wellas a character.’ 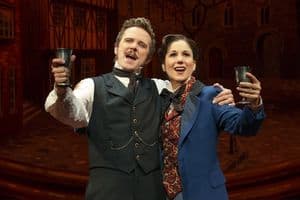 NK: If we consider this in relation to cross-dressing in Shakespeare, Iwould think it’s closer to the tradition of boys taking on women’s roles inearly productions, rather than instances of female characters cross-dressing asmen within the plays themselves.

NK: There’s minimal winking at the audience, and your character in theplay within the play (Edwin Drood) isn’t actually a woman in disguise, butsimply being played (and sung beautifully) by a female actor.

SJB: Exactly. And thank you for that by the way, thank you..

NK: How do you think this kind of cross-dressing plays into the plot ofDrood?

SJB: When I first met with Rupert Holmes, my first question was verymuch what you asked. I said how far do I need to go?  Does the audience need to completely believethat I am transformed into a man by lowering the timbre of my voice, bychanging my gait and my walk?  And hesaid, of course we’re going to attempt to get to certain places, but no.

The whole conceit of a woman playing a man’s role in a music hallpantomime is that the audience is completely aware that this is a woman. We’renot trying to do like a ‘Crying Game’ reveal at the end, where the wholeaudience goes, ‘Oh, my gosh I can’t believe it’s a woman!’ They shouldabsolutely go along with the whole conceit of it.

He gave me the examples of Mary Martin or Cathy Rigby playing Peter Pan.So, I found great resolve in that. My voice changes a bit and I have founddifferent physical mannerisms that indicate I’m playing a man. Of course, thewardrobe adds greatly to that. I agree with you that it is a little more likeShakespeare where the man is playing a woman, because you’re right, we’re notwinking and nodding the entire time.

I do make a couple littlephysical movements, like there’s a line for example that says that Rosa Bud andmy relationship has an unavoidable flatness, and I pat down there to let theaudience know, you know, quite frankly I don’t have a dick. [Laughs] And theaudience giggles and we move past it and we get right back on to the plotpoints.

As you also mentioned, Rupert wrote a score that doesn’t let the singergo to that lower timbre, he wrote in a soprano or mezzo-soprano and alto rangeso there’s no real way of getting around me or [the audience] recognizing thatI’m a woman throughout the entire play. I find it kind of thrilling that I go backin and out and in and out, where I can say a line and it’s in this lower rangeand then I start to sing and I’m sitting on notes that are belting B’s andfloating C’s. So I kind of enjoy bouncing back and forth.

NK: You mentioned that your costumes by William Ivy Long play a bigrole in your transformation, how so? 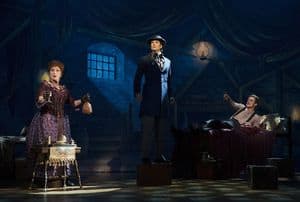 SJB: I love dressing like a man.  I gotta be very very honest, at first I waslooking at the women’s costumes and they looked so beautiful and their figureswere amazing, and I was envious thinking they look so feminine and gorgeous.And now all they’re doing is complaining about their bad backs, their knees,and here I am wearing comfortable slacks and flat shoes. So it’s kinda great!

[William Ivy Long] had done 9 to5, he had done Boy From Oz, so wehave this long term working relationship, but I was meeting him at a different costumehouse because everything had to be tailored for a man. And I’m not talking tailoredfor a man to flatter a woman’s body, it was tailored to a man. So that sort of feminine style that I knew would be moreflattering on my body, I had to let that go and say, ok this isn’t mybody.  My breasts are going to beflattened down and my waist is not going to be accentuated, my hips have to becompletely covered up. So it was a really interesting sort of process where Ijust thought, okay, you need to put all image aside and you need to be a boy,you need to be Edwin Drood.

NK: How does cross-dressing compare to going green as Elphaba in Wicked?

SJB: [Laughs]  Well, it’sdifferent challenges, I will tell you that cross-dressing is a hell of a loteasier than going green, because once I take it off and I come home, is therestill that remnant on my pillow?  And onmy towel and in my ears and my nose?  AfterI got done doing Elphaba, three weeks later I was still finding green paintthroughout my house.

NK: Are you a big fan of drag entertainment yourself?

SJB: I love it! [Laughs ] Itotally love how over the top it is, I love how committed these artists are.You know it’s so wonderful because a dear friend who I consider like a brother,he called me a couple years ago after 9 to 5 and he’s like, ‘Girl, you have made it.’ And I went, ‘What do you mean?’He said, ‘Go to YouTube.’

Sure enough there was this glorious drag queen full-on lip syncing to 9 to 5’s ‘Get Out and Stay Out,’ whichthen segued into my ‘Defying Gravity.’ It made me laugh, but at the same time Iwas like, ‘I have. I have made it inthe musical theatre world. There is a drag queen lip syncing to my stuff!’  And I had this great sense of pride, like‘Woohoo! I’m somebody!’ [Laughs]

The Mystery of Edwin Droodcontinues performances at Roundabout Theatre Company’s Studio 54 through March10, 2013.