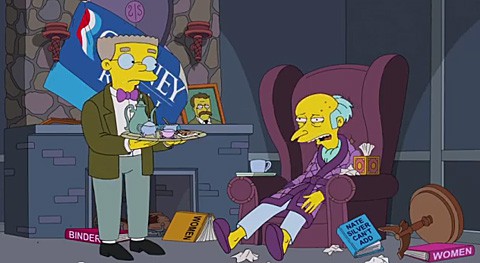 Mr. Burns is one of those despondent Republicans upset over the recent election loss. However, he's still got some fear tactics up his sleeve – the upcoming "fiscal cliff". In this brief clip, he tries to explain what might happen if you don't let the richest people keep their tax cuts.

In related news, if you're interested in taking action against Republican resistance on the Fiscal Cliff, here's a new website called The Action which is working to end the Bush tax cuts for the richest two percent. You can sign the petition in support of Pelosi's Discharge Petition or learn how to call key members of Congress, and demand an end the Bush tax cuts. Here's also a round-up of related events.