A Brooklyn man says he was attacked by homophobic police officers who responded to noise complaints at a party he was having. He says the officers arrived after another group of officers had left, and tried to disable a surveillance camera on the outside of the building before entering. 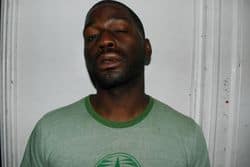 Officers from the 77th Precinct, responding to reports of noise at the Sterling Place party, "bum-rushed" Jabbar Campbell after he opened the door of his apartment.

"They were screaming and cursing saying things like 'fag,' 'homo,' 'a–hole,' just a bunch of anti-gay slurs," Campbell, a 32-year-old forensic specialist, told The News.

Campbell said he was beaten by the officers, who bloodied his mouth, split open his lip and caused swelling to his left eye. He was then handcuffed and charged with resisting arrest — and spent 24 hours in police custody.
Campbell filed legal paperwork Wednesday revealing his intention to sue the city.

Said Campbell's lawyer: "They were trying to conceal the evidence by turning the camera away. They committed a hate crime inside a gay pride event."