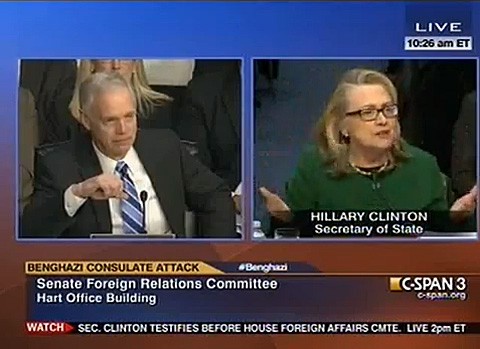 Said Johnson: "Again, we were misled there was supposedly protests and something spraying out of that, assault spraying out of that. That was easily ascertained that was not the fact and the american people could have known that within days and didn’t know that."

Blasted Clinton: "With all due respect, the fact is we had four dead Americans! Was it because of a protest or was it because of guys out for a walk one night decided to go kill some Americans?! What difference at this point does it make?! It is our job to figure out what happened and do everything we can to prevent it from ever happening again."

At another point in the hearing, Clinton got choked up talking about receiving the bodies of the four slain State Department employees:

"I stood next to President Obama as the Marines carried those flag-draped caskets off the plane at Andrews…I put my arms around the mothers and fathers, sisters and brothers, sons and daughters."