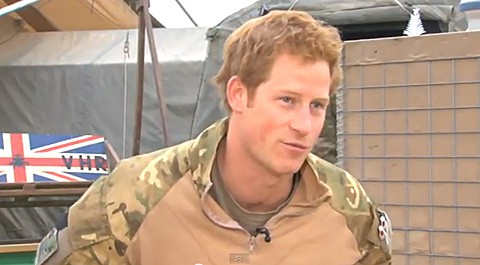 A candid interview with Prince Harry by the UK's Channel 4 is making waves in Britain. In the interview, Harry talks about killing Taliban militants, comparing operating his helicopter's gunner to playing video games, the NYT reports:

At one stage in the interview, Prince Harry said that he was not troubled by killing militants. “Take a life to save a life,” he said. “If there’s people trying to do bad stuff to our guys, then we’ll take them out of the game.”

In another edit of the footage, posted online by The Guardian, Prince Harry, who is known as Captain Wales in the army, explained that he was glad to have been “pushed forward to the front seat,” the one reserved for the attack helicopter’s gunner. That was, he said, “a joy for me because I’m one of those people that loves playing PlayStation and Xbox, so with my thumbs I like to think I’m probably quite useful — if you ask the guys I thrash them at FIFA the whole time,” referring to a popular video game series.

The Taliban are not pleased.

He also says that Prince William is jealous of his military career, and comments on the nude photos of him partying in Las Vegas:

"I probably let myself down, I let my family down, I let other people down…but at the end of the day, I was in a private area and there should be a certain amount of privacy that one should expect…It was probably a classic example of me probably being too much army, and not enough prince. It's a simple case of that."

Watch the clips, AFTER THE JUMP…