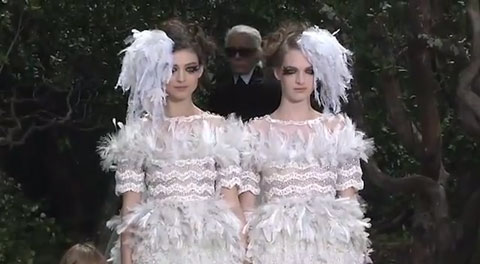 Karl Lagerfeld closed his Chanel Spring 2013 Haute Couture collection this morning in Paris, with a statement, the Guardian reports:

Less than 24 hours after the president's call for equality, Karl Lagerfeld subverted the traditions of Paris haute couture by closing the Chanel catwalk show with not one blushing bride, but two, hands clasped and dressed in identical, ravishing wedding gowns.

Lagerfeld said he wanted to signal his support for the controversial French gay marriage law, which has led protesters to take to the streets of Paris. "I don't even understand the debate," said Lagerfeld. "Since 1904 the church and state have been separate."

However, never one to miss an opportunity for maximum controversy, Lagerfeld added that he was "less keen" on gay couples being allowed to adopt children.