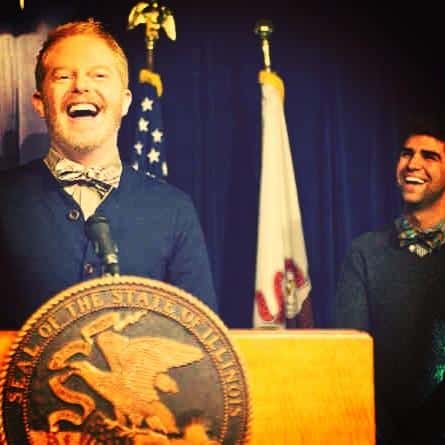 Jesse Tyler Ferguson joined Illinois Lt. Governor Sheila Simon at the Thompson Center in Chciago on Wednesday morning to launch "Marriage Equality Days of Action" and then went to Springfield in support of the marriage equality bill, which, as I noted earlier, has been pushed to next session.

Watch him speak out for marriage equality in Springfield, AFTER THE JUMP…

Advocates also encouraged capitol visitors to don bow ties on Thursday in support of Bow Tie Lobby Day in Springfield, when a marriage equality bill could be called for a vote. Ferguson and Mikita recently launched a not-for-profit organization called "Tie The Knot," a foundation that sells unique, limited-edition bow ties, with profits going to charitable organizations that are working for marriage equality throughout the country.

"Justin and I are thrilled to be participating in Springfield's Bow Tie Lobby Day," Ferguson said. "Drawing attention to the importance of marriage equality at this level is exactly why we developed Tie The Knot. We are also excited to see how the citizens and legislators of Illinois do with their bow tying skills."

Previous Post: « A Once or Future (Living) Mars?
Next Post: Rachel Maddow Says Good-bye to the 112th Congress: VIDEO »