An anti-gay megachurch's move into Seattle's "gayborhood" has offended many of its residents, and its pastor's remarks have only added fuel to the fire, the NY Daily News reports: 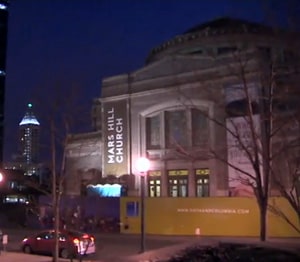 The Mars Hill Church Downtown Seattle’s new home is blocks from Capitol Hill, which is known locally as the “gayborhood.” The church plans to use the new location as a base to minister to the city’s business people; the homeless; and the lesbian, gay, bisexual and transgender community.

“Being closer to Capitol Hill is a blessing as we are serving and ministering to those who are infected with AIDS on the hill,” said Tim Gaydos, lead pastor of Mars Hill Church’s Downtown Seattle branch said in a release to KOMO News.

Local LGBT rights organizations are not happy with Gaydos’ statement and its implications. Shaun Knittel, founder and board president of Social Outreach, a LGBT rights coalition, called the comments a “lower form of hate speech — ignorance speech.”

“What the pastor is saying is that gay neighborhoods equal AIDS neighborhoods, ” Knittel told the Daily News. “That just because you’re gay or lesbian on Capitol Hill, that means you have HIV/AIDS.”