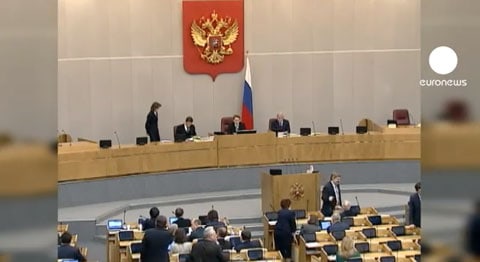 Russia's Duma has passed a bill banning gay "propaganda" in a 390-1 vote on the bill's first reading Russian LGBT Network reports in a press release:

Now the Committee on Family, Women and Children Matters is to refine the bill taking in account all amendments received and initiate the second reading by the Russian State Duma. The Duma decision states that the responsible Committee should accept the amendments that determine the "homosexualism" term description or to replace it with another term which can be found in the Russian legislation and to specify the set of elements of this administrative offense. The amendments will be accepted for consideration till 25 May.

Elena Mizulina, the head of the Committee for Family Matters, declared that the task team on this matter will be organized. According to her, there will be a representative from LGBT in this team.

Igor Kochetkov, the Chairman of the LGBT network: "The State Duma must pass the laws that prohibit any discrimination. If the task team, Mizulina said about, is ready to change the bill 6.13.1 so that it no more contains provisions offending and discriminating LGBT community, than we are ready to take part in this team and make our proposals. Another question is who will be in this team. It's important to hear not only an opinion of related parties but also an opinion of independent human right defenders. We think that apart from people mentioned by Mizulina, there must be representatives of Russian Federation ombudsman and human right organizations, who have an experience in defending the freedom of expression and right to exercise the freedom of peaceful assembly, in this team. Only if these terms are observed, we can talk about considering this bill not on religious or political grounds but from human right and respect for human dignity point of view”*.

After two more readings, the bill will be signed by President Vladimir Putin.

Russian police broke up another kiss-in protest outside the State Duma in Moscow as it prepared to consider the law, Reuters reports:

Police said about 20 people were detained outside the State Duma, the lower house, after minor scuffles broke out between rival groups of supporters and opponents of the law. The supporters, some of them holding Russian Orthodox icons or crosses, cheered and threw eggs as police hauled away protesters who started kissing. One gay activist was splashed with green paint, witnesses said.

If approved by the two houses of parliament, and signed by Putin, the law would ban the promotion of gay events across Russia and impose fines on the organizers.

Three dozen were detained in the protest, according to the AP.

Watch a Euronews report on the recent uptick in violence and the Duma's consideration of the bill, AFTER THE JUMP…