A powerful editorial from the New York Times published last night argues that Obama's Inaugural address, in which he put gay rights in line with civil rights struggles for women and African Americans, reflects "a deepened understanding" that he must follow through with by getting involved more fully in the marriage cases before the Supreme Court, specifically Proposition 8: 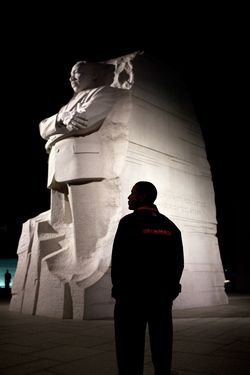 "Now that Mr. Obama has declared that he believes denying gay people the right to wed is not only unfair and morally wrong but also legally unsupportable, the urgent question is how he will translate his words into action. To start, he should have his solicitor general file a brief in the Proposition 8 case being argued before the Supreme Court in March, saying that California's voter-approved ban on same-sex marriage is unconstitutional."

The NYT echoes what many LGBT advocates have been pushing for:

The outcome of the Proposition 8 case is likely to affect the lives of gay, lesbian and bisexual Americans for years to come, even if the final disposition is not sweeping enough to wipe out all state laws currently banning same-sex marriage. A strong filing by the Justice Department, forthrightly declaring that denying the freedom to marry violates the Constitution, would put the full weight of the federal government on the side of justice and could influence the shape of the ruling.

For the administration to be missing in action in this showdown risks conveying a message to the justices that it lacks confidence in the constitutional claims for ending gay people’s exclusion from marriage or that it believes Americans are not ready for a high court ruling making marriage equality the law of the land — impressions strikingly contradicted by legal precedent, the lessons of history and by the president’s own very powerful words.

Reuteres reports that lawyers on both sides of the case seek the administration's support:

Each side wants the administration's support in a late-March showdown on the fundamental rights of gay men and lesbians.

On Jan. 18, Theodore Olson and David Boies, the well-known duo representing gay couples challenging California's ban on same-sex marriage, asked the administration to back their claim of a constitutional right to such unions nationwide. On Thursday, attorney Charles Cooper, who has long represented defenders of the ban known as Proposition 8, asked the government to stay out of the case.

These advocates and others in the dispute over same-sex marriage joined a common but little-known ritual of Supreme Court litigation. Parties seeking outside "friend of the court" briefs they hope will sway the court's nine justices often try to get the weight of the federal government behind them. Justice Department officials regularly hear out both sides, with such meetings concerning a couple dozen cases each court term.

Lawyers who attended the private sessions on gay marriage said the government attorneys, while nodding at some points made by both sides, did not tip their hand.