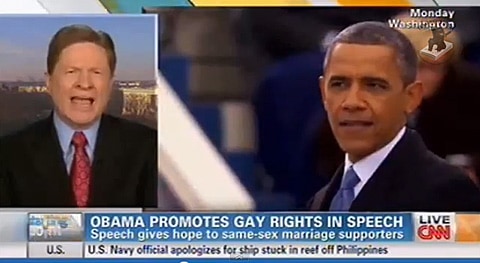 Hate group leader Peter Sprigg from the Family Research Council was invited on CNN this morning to sound off on Obama's call for gay rights in his inauguration speech.

"The irony is, homosexuals already have all the same civil rights as anyone else. But that fact that all people are created equal as individuals does not mean all sexual behavior is equal or that all personal relationships have an equal value to society at large."

Sprigg's erroneous and bigoted sentiment was echoed by National Organization for Marriage President Brian Brown in a statement on the group's blog:

"Gay and lesbian people are already treated equally under the law. They have the same civil rights as anyone else; they have the right to live as they wish and love whom they choose. What they don’t have is the right to redefine marriage for all of society. …

…A presidential inauguration should be a time for the nation to come together; instead President Obama chose to voice his support for a radical agenda advanced by some of his biggest campaign contributors to redefine marriage for everyone. Marriage brings our nation together. The concept of gay 'marriage' would have been totally alien to our founding fathers, and the protection and advancement of marriage between one man and one woman will immeasurably serve the common good of this country and further strengthen our Union. Today the President should have thrown his support behind this beautiful vision of men and women coming together in love to raise the next generation. Nonetheless, we pro-marriage Americans pledge to defend the institution which the President has chosen to undermine once again."