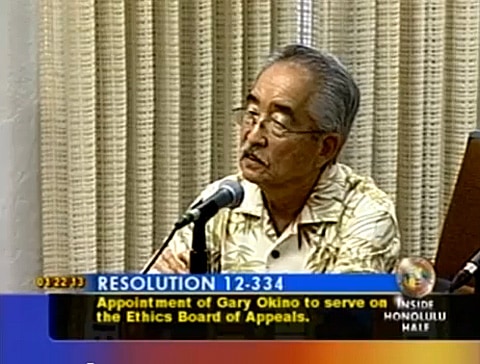 A former Honolulu City Councilman campaigning for a spot on the Ethics Board of Appeals had his nomination withdrawn by Honolulu Mayor Kirk Caldwell over the weekend after outrage over an interview gave at a Executive Matters and Legal Affairs Committee meeting last week about his views toward gays.

Said Okino at the meeting:

"First of all I have to say that tolerance is not a virtue. Are you tolerant of murder? Are you tolerant of drug abuse? No you're not. So I have no tolerance for homosexuality and I get accused of being intolerant. Is it good? Is it bad? Intolerance is relative…It's not only that we're against stealing, against drug abuse. But the divine law says that same sex marriage and homosexuality is not pono. It's not right, it's immoral, it's deviant. There is an outbreak now of anal, penile and throat cancers among the homosexual community. Okay it's proven study after study that emotionally, psychologically, socially homosexuals are the mostly negatively impacted of all segments in the community. There is a negative impact on families and children. Our children are imperiled by that."

"In my overzealousness to respond to the allegations made against me by the testifiers (at) the committee meeting, I now realize that I may have unintentionally hurt the very people I was trying to help. To my gay brothers and sisters and their supporters, I deeply apologize if my words were hurtful rather than helpful. That was not my intent. In my eagerness to express what we believe is right and what is wrong, I had forgotten that we truly do belong to a loving God, and that He also asks us to treat people with the love, reverence and dignity that they deserve."