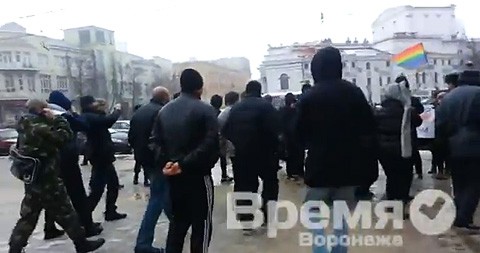 Russia is planning to enact oppressive gay legislation banning "gay propaganda" which might include things as minor as a kiss, nationwide, the AP reports:

The legislation being pushed by the Kremlin and the Russian Orthodox Church would make it illegal nationwide to provide minors with information that is defined as "propaganda of sodomy, lesbianism, bisexuality and transgenderism." It includes a ban on holding public events that promote gay rights. St. Petersburg and a number of other Russian cities already have similar laws on their books.

The bill is part of an effort to promote traditional Russian values as opposed to Western liberalism, which the Kremlin and church see as corrupting Russian youth and by extension contributing to a wave of protest against President Vladimir Putin's rule.

Samburov describes the anti-gay bill as part of a Kremlin crackdown on minorities of any kind — political and religious as well as sexual — designed to divert public attention from growing discontent with Putin's rule.

The oppressive law could levy a $16,000 fine for a gay public kiss.

The AP also makes note of an attack this weekend in Voronezh, a city south of Moscow. Several activists protesting the planned legislation were violently attacked by anti-gay counterprotestors throwing snowballs.