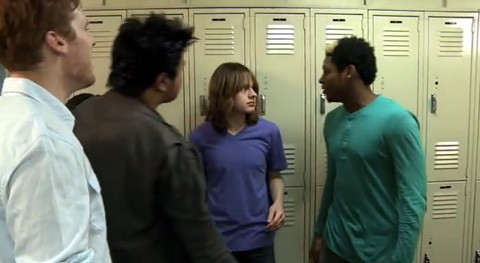 Betsy Gallun worked as the supervisor for health education in Prince George's County Public Schools until she retired last year, and she thinks information about gay-to-straight therapy should be available to Prince George's County students. "I feel very badly that it's coming under scrutiny, to be honest with you," says Gallun…

…Six health classes have shown "Acception" since last fall, according to PGCPS spokesman Briant K. Coleman—and more were expected to use it this year, says Doyle.

State education regulators also approved the video, according to Coleman. But on Wednesday, PGCPS pulled the video pending further review, only to terminate the program permanently later that day. 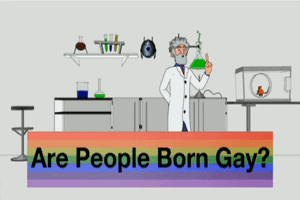 Gallun was introduced to the 21-minute anti-bullying video (stills from it above, and right) "Acception" by "ex-gay" quack Richard Cohen:

[The video] at first appears to promote the acceptance of gay children. In the video, four students are assigned a project on homophobic bullying, with the group splitting up to study the issues of bullying and the origins of homosexuality. Two of the students encounter a cavemen parable about the origins of bullying, but the teens researching same-sex attraction soon find themselves in a different kind of scientifically dicey territory. While the video initially explores gay teenagers being bullied and a young man coming out to his parents, it soon features a student talking about how his once-lesbian cousin used therapy to become attracted to men. Then, the students in the video "watch" an interview with a gay-to-straight therapist.

"If someone wants to live a gay life, I respect that, and if someone wants to change from gay to straight and choose a different path, I respect that too," says the character, played by an actress. The success of "reparative therapy" is touted elsewhere in the video: In a portion of the video you can watch on YouTube, a woman who once felt attracted to other women says that growing closer to her mother and female friends—a trope of sexual orientation-switching theory—helped her become attracted to men. Discussion questions provided to teachers using "Acception" feature scenarios in which sexual orientation is changed through therapy.

Watch a trailer for the video (which does not show the part where it veers into ex-gay therapy) and a clip from it, AFTER THE JUMP…

Previous Post: « Ellen Sounds Off on the Boy Scouts Gay Ban, Reveals Adorable Photo of Herself as a Girl Scout: VIDEO
Next Post: Ethan Hawke Opens in ‘Clive’ Off Broadway: REVIEW »