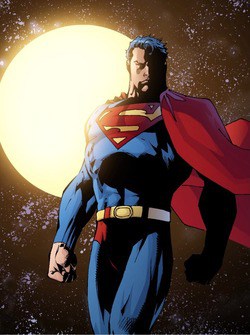 It's not only that Card's an anti-gay activist who works with the National Organization for Marriage, it's because of the character at hand, Superman. It would be a different story if Card were commissioned to helm a story starring a minor character — oft-mocked Matter-Eater Lad, the avowed geek suggests — but Superman's different; " he's the superhero."

"Superman is an ideal," Weldon writes at NPR. "He represents our best self. That's what he's for. He's not the hero we identify with — that's what Spider-Man is for… In Superman, we see ourselves as we hope to be. It's right there in the name — he's not 'Pretty Good Man' or 'Doesn't Suck Man'; he's Superman. He personifies our noblest ideals, ideals we believe in, and strive for…"

Weldom reminds readers that Superman was originally a "champion of the oppressed," but has picked up some other fitting nicknames along the way, including "man of tomorrow."

One of the other nicknames that accrued to Superman right away – that predates "Man of Steel" by a good amount – is "The Man of Tomorrow." And much of his early iconography bears a distinctive Socio-Realist, Diego Rivera vibe: a lot of burnished golden sunrises, eyes raised to the horizon, gazing into the future.

Because that's where he lives, Superman. And that's what he says to us: We can do better. We can be better, to ourselves, and to each other.

So far it seems DC is standing by their decision to hire Card for the two-part digital story. The company said in a statement, "As content creators we steadfastly support freedom of expression, however the personal views of individuals associated with DC Comics are just that — personal views — and not those of the company itself."