In a new piece for the American Conservative, former Utah governor and presidential candidate Jon Huntsman warns that "the marketplace of ideas will render us irrelevant, and soon, if we are not honest about our time and place in history" and calls on Republicans to embrace marriage equality: 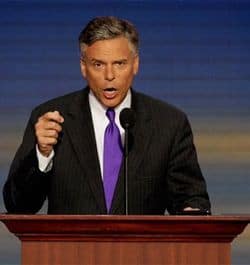 While serving as governor of Utah, I pushed for civil unions and expanded reciprocal benefits for gay citizens. I did so not because of political pressure—indeed, at the time 70 percent of Utahns were opposed—but because as governor my role was to work for everybody, even those who didn’t have access to a powerful lobby. Civil unions, I believed, were a practical step that would bring all citizens more fully into the fabric of a state they already were—and always had been—a part of.

That was four years ago. Today we have an opportunity to do more: conservatives should start to lead again and push their states to join the nine others that allow all their citizens to marry. I’ve been married for 29 years. My marriage has been the greatest joy of my life. There is nothing conservative about denying other Americans the ability to forge that same relationship with the person they love.

All Americans should be treated equally by the law, whether they marry in a church, another religious institution, or a town hall. This does not mean that any religious group would be forced by the state to recognize relationships that run counter to their conscience. Civil equality is compatible with, and indeed promotes, freedom of conscience.

Huntsman warns the GOP that it is at a crossroads and risks losing even more if it does not progress socially.