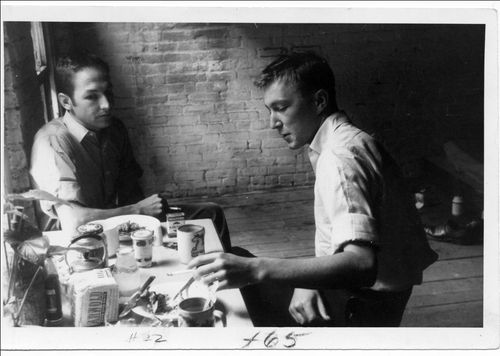 The Museum of Modern Art currently has on display a wonderful, compact installation titled simply “Johns and Rauschenberg.” Featuring art culled from the museum’s permanent collection, “Johns and Rauschenberg” focuses on works painted by each artist during the mid to late 1950s, using Robert Rauschenberg’s recently acquired Canyon as a centerpiece. The introductory placard describes the two artists as being “in dialogue with one another,” explaining how their works from this period led the way “beyond Abstract Expressionism” and toward Pop Art. At the heart of the installation is the relationship between the two men, an intensely collaborative yet highly competitive connection which pushed each artist toward his own artistic triumph.

It’s a nice narrative, as far as it goes. But it doesn’t go nearly far enough. Rauschenberg and Jasper Johns were lovers during this six-year period of collaboration, and their relationship had a profound impact on their art.

Stern thinks the MoMa is concerned about offending its patrons. Meanwhile, everyone seems to be toeing their line:

In an attempt to justify this re-closing of the artistic closet, MoMA’s press office first informed me that Johns and Rauschenberg “wish to be described” as just friends. (Rauschenberg died in 2008; Johns is 82.) When I asked whether the artists specifically requested such a label, the museum’s representative walked back the claim, instead stating that they “have been referred to that way [as friends, that is] historically,” but the rep would not say whether the artists themselves insisted on the “friends” phrasing. Neither would the Robert Rauschenberg Foundation, which officially had “no reply” to the question, or the Matthew Marks Gallery, Johns’ dealer, which failed to respond to repeated inquiries.