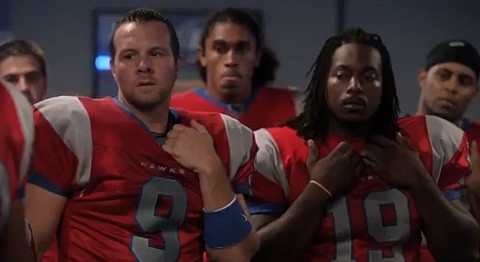 USA Network's series Necessary Roughness tonight tackles territory thus far uncharted by the real-life NFL, the coming out of a top quarterback. Check out a previously unreleased clip showing what happens when the player is taunted into telling the team.

Vikings Punter Chris Kluwe says the show got it right:

After watching the two episodes of “Necessary Roughness” dealing with a gay football player coming out, I was struck by how accurately the writers and producers of the show portrayed what the locker room would be like. Now, obviously this is a television show, and no gay player has come out yet. But the show managed to capture the very essence of an NFL locker room.

Will a gay player face people who don’t understand, people who throw insults and jeers? Absolutely. But if that player is in a locker room full of men, true men, men who understand the underlying bedrock of football, then that player won’t care because he’ll be part of a team — and that’s exactly what “Necessary Roughness” nailed in these two episodes. The cohesiveness of team.

The episode airs at 10/9c tonight on the USA Network.