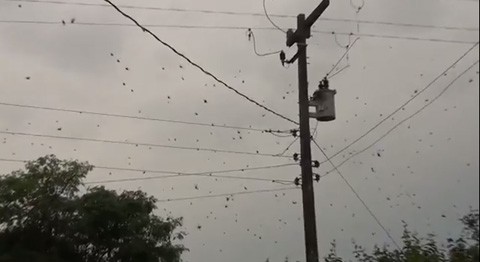 If you woke up this morning to find a couple feet of snow outside your door, just be thankful it wasn't thousands of large spiders instead. This Hitchcockian scene comes from the southern Brazilian town of Santo Antônio da Platina.

Brazilian news portal G1 reports that this footage was captured by 20-year-old web designer Erick Reis as he was leaving a friend's engagement party this past Sunday.

G1 spoke with a local biologist who identified the spider as Anelosimus eximius — a "social spider" species known for its massive colonies and "sheet webs." He characterized the phenomenon as "normal," which it most certainly is not.

Watch (arachnophobes beware), AFTER THE JUMP…

Previous Post: « Boy Scouts: A Leaker Spoiled What Was to Be a Private Discussion of Gay Ban, and All Hell Broke Loose
Next Post: Towleroad Guide to the Tube #1303 »