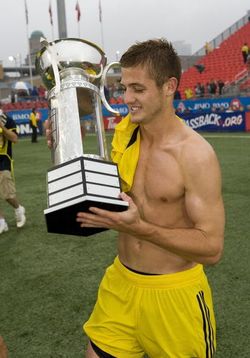 There was some ground being broken in soccer today where a member of the U.S. National team came out in a late night blog post in which he also announced that he would be taking time away from the sport to discover himself away from soccer. If Robbie Rogers needs some help in that discovery send him my number!

Also Gallup just released it's run-down of states and the percentages of people in them who identify as LGBT. Our nation's capital tops the list.

ICYMI: Check out Will and Sonny's steamy Valentines Day shower make-out on Days of our Lives! Maggie Smith may be very proud of her work on the smash hit Downton Abbey but that doesn't mean that she has seen a single second of it. And Azealia Banks continues to pontificate on the proper usage and true meanings of gay slurs

Armageddon-like scenes in Russia where a meteor exploded as it came through the atmosphere! The resulting explosion has reportedly injured up to 1,000 people. On a much, much brighter note check out this heart-warmingly adorable gay birthday video!