Another teen lost to anti-gay bullying, this time in the UK. 16-year-old Anthony Stubbs' body was found in the woods near his home, six weeks after he had disappeared. He had hanged himself. His mother says it was because of anti-gay bullying: 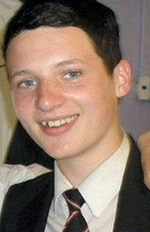 Still, grieving Denise Machin believes she knows the reason very well. She blames the bullying girls who hounded him about his sexuality, and his own inner struggle with his feelings.

Denise, 34, says: “Anthony was getting bullied by girls for two years. He would get shouted ‘gay boy’ at, get slapped in the face, come home with his school jumper ripped and even got his phone stolen. He would be upset but pick himself up and go back the next day.

“I spoke to his teachers about it, but Anthony begged me not to get involved because it was making it worse and he’d get embarrassed.”

He had told his mother he was bisexual:

“Anthony was obviously experimenting, finding out who he was.” They reported Anthony missing on November 26, and on December 30 Denise and Charlotte gave an emotional press conference begging the teenager to come home.

But Denise admits now: “The press conference I did was awful — I knew deep down he wasn’t coming back. I just couldn’t feel him in my heart any more. I knew something serious had happened.”

When police found his body, Denise was almost relieved — especially because of the note he left.

It reads: “Well, I’m gone but not completely. I will be watching over you and making sure you make the right choices. And don’t forget me, I’m in heaven looking down. Please don’t grieve and try to move on as best you can, I love you all so very much.’