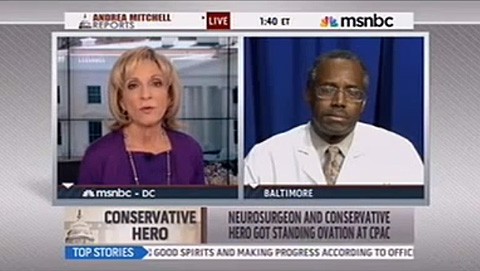 Conservative hero Dr. Ben Carson appeared to try to apologize for disgusting remarks he made earlier this week to Sean Hannity comparing gays to pedophiles and people who have sex with animals. Students at Johns Hopkins University, where he is slated to serve as commencement speaker, are petitioning for his withdrawal.

Said Carson to Andrea Mitchell, in a kind of Santorum-speak:

"As a Christian, I have a duty to love all people and that includes people who have other sexual orientations, and I certainly do, and never had any intention of offending anyone. What I was basically saying, and if anyone was offended I apologize to you, but what I was basically saying is there is no group — I wasn’t equating those things, I don’t think they are equal. If you asked me for an apple and I gave you an orange, you would say 'well that’s not an orange.' And then I’d say well there’s a banana…'that’s not an apple either.' And there’s a peach…'that’s not an apple either.' But it doesn’t mean that I’m equating the banana and the orange and the peach. In the same way, I’m not equating those things."

Watch Carson try to apologize, and the Hannity segment, AFTER THE JUMP…