Some Christians are reportedly outraged over a Massachusetts charter school's production of The Most Fabulous Story Ever Told, a gay reteilling of the Bible's creation story, Raw Story reports: 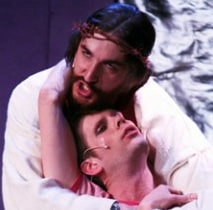 Christian Broadcasting Network (CBN) on Sunday reported that Pioneer Valley Performing Arts Public Charter School (PPVA) has been flooded with emails and phone calls calling the adaptation of the Genesis story “blasphemous and hateful.” Some messages threatened to organize protests through churches in the South Hadley area.

“While we have no control whether organizations from other states decide to protest the show, it is clear to me that many of the most recent emails are attempts to coerce PVPA into canceling the play,” Head of School Scott Goldman said in a statement last week. “Allowing this to happen would very much go against the grain of our unique, artistic and intellectually rigorous PVPA community and the larger Pioneer Valley Community.”

The show will be going on for three nights this weekend.