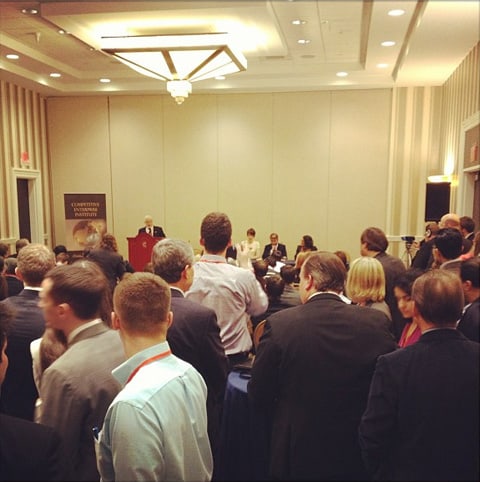 Two Instagram photos from Buzzfeed's Chris Geidner reveal that the only gay event at the 2013 CPAC conference – "A Rainbow on the Right: Growing the Coalition, Bringing Tolerance Out of the Closet" attracted lots of interest while Cleta Mitchell, Hans von Spakovsky, Ben Shapiro & Brian Brown's NOM panel (below)was left a bit wanting for interest.

As you may know, gay groups GOProud and Log Cabin Republicans were barred from the conference but found a way in via this panel, organized by the Competitive Enterprise Institute.

The Daily Beast has a report on the gay panel:

The event was hotly anticipated—and overly crowded—as the Competitive Enterprise Institute, a libertarian think tank actually invited to the Conservative Political Action Conference, circumnavigated the snub by hosting its own panel on same-sex marriage and asked GOProud co-founder and executive director Jimmy LaSalvia and others to speak.

“A new conservative coalition starts here in this room. Will you join us? Will you stand up to forces of intolerance?” LaSalvia implored the crowd. “Join us in building a better coalition that can win and use it in making America better.”

The message projected by LaSalvia and, echoed by his fellow panelists, was that government intervention in how people live is not the conservative way.

Meanwhile, AFA spokeshater Bryan Fischer welcomed Cliff Kincaid, the director of the 'Accuracy In Media Center' to his radio show for a hilarious segment about the gay "infilitration" of the conference.