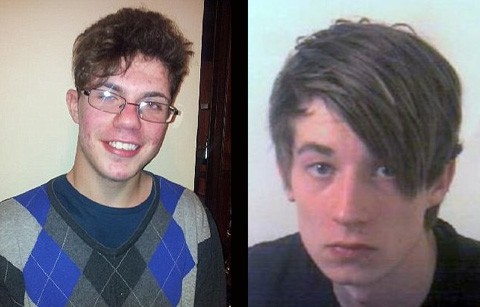 Jordan Sheard, (right), 20, was sentenced this week for the manslaughter death of gay UK teen Steven Simpson (left), whom he doused with tanning oil and lit ablaze after taunting him about his sexuality at the teen's 18th birthday party. Simpson, who was autistic, died from his burns the next day in the hospital.

Sheffield Crown Court heard that Jordan Sheard, 20, flicked the lighter and Steven went up in flames with Sheard and others running away instead of helping him. The teenager, who suffered from Asperger’s syndrome, a speech impairment and epilepsy, died in hospital from 60 per cent burns the next day.

Judge Roger Keen told him: “What it did was engulf him in a fire. You tried to briefly assist and then you ran away. That in my judgment is serious aggravation.”

The court heard the only person who went to Steven’s aid was neighbour Sean Banner who burned himself in the process. But when Mr Banner returned to the flat in Pleasant View, Cudworth, near Barnsley, he was initially arrested on suspicion of murder. Sarah Wright, prosecuting, said that earlier in the evening Sheard, who vaguely knew Steven, and two others joined the party and were let in despite having not been invited.

Simpson was openly gay and had moved in to the flat because he had been bullied at his other address.

The court heard that as Mr Simpson became increasingly drunk at his party, he was dared to strip to his boxer shorts.

Defendant Jordan Sheard, 20, who had gatecrashed the house party, was seen taunting the host, who was openly gay, and then scrawling obscene and homophobic insults on his bare stomach, face and forearm. After 2am, a partygoer took the Calypso tanning oil from Mr Simpson’s bedroom and, as it was poured over him, others chanted: ‘Light it, light it.’

Miss Wright said: ‘Steven did not object; he seemed to be enjoying the situation.’

But the court heard that Sheard then held a cigarette lighter to Mr Simpson’s groin, and instantly the highly flammable liquid caught alight and flames engulfed his body. Instead of putting out the fire, Sheard ran away.

Sheard received three and a half years in prison.

Previous Post: « What To Watch For: ‘Standing’ in the Supreme Court’s DOMA Case, Windsor v. United States
Next Post: Sarah Palin Shows Her Support for Chick-fil-A Once Again »