The NY Post applied for a press pass to the GLAAD Media Awards but was denied because of its history of anti-trans coverage, GLAAD reports: 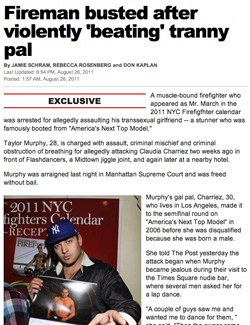 GLAAD was founded in 1985 to challenge The New York Post's blatantly anti-gay coverage of the HIV/AIDS crisis. More than 27 years later, the paper continues to defame the LGBT community with its sensational framing of transgender stories and its disgraceful practice of referring to transgender people with vulgar slurs.

Below are just a few of the paper's recent dehumanizing headlines and stories:

Bravest gets off easy on she-male beat

The Post’s most recent coverage of court proceedings in an assault case brought by a transgender woman against her former boyfriend was particularly repugnant. GLAAD and transgender advocate Laverne Cox criticized several articles from the Post that trivialized the significance of the case, rather than taking the opportunity to highlight the serious problem of violence against transgender people, and especially trans women.

Said GLAAD President Herndon Graddick. "Transgender people, particularly those who are victims of crime, deserve more than the vile slurs and underhanded 'jokes' with which the Post describes them. Until this paper changes its ways and apologizes for the damage done, GLAAD has no interest in supporting their work."