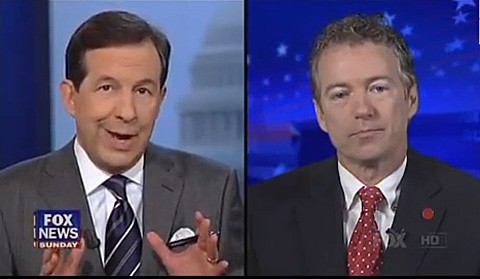 FOX News' Chris Wallace asked Kentucky Senator Rand Paul this morning if he felt that the Supreme Court striking down DOMA would mean too much federal interference in a states' rights matter.

DOMA is complicated, though, because DOMA does provide protection for the states from the federal government. But, then, you're right, part of it federalizes the issue.

I think there's a chance the court could strike down the federalization part of it. If they do, I think the way to fix it is maybe to try to make all of our laws more neutral towards the issue, and, I don't want the government promoting something I don't believe in. But I also don't mind if the government tries to be neutral on the issue.    You know, the tax code, I'm for a flat income tax and we wouldn't have marriage as part of the tax code. Health insurance, I think there is a way to write it where it would be neutral and you wouldn't bring marriage into the whole idea of health insurance.

Previous Post: « Protesters Riot with Police as Hundreds of Thousands March Against Gay Marriage in Paris: VIDEOS
Next Post: Here’s the Route of the NOM Hate March Against Equality: MAP »