Rapper A$AP Rocky sits down with Interview magazine and touches on his support for gay equality: 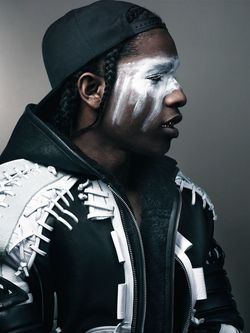 For me, growing up in Harlem and then migrating down to SoHo and the Lower East Side and chillin' down there and making that my stomping ground . . . That was a big thing, because I'm from Harlem, and downtown is more artsy and also more open-minded. So I got the best of both worlds. It was like being on the streets and then being in school at the same time, and I tried to keep my hands in everything just so I wasn't missing out on any fun. I just always wanted to be knowledgeable of my whereabouts, my surroundings, and what was going on with our generation.

So now that I'm here and I've got a microphone in my hand and about 6,000 people watching me, I need to tell them how I feel. For instance, one big issue in hip-hop is the gay thing. It's 2013, and it's a shame that, to this day, that topic still gets people all excited. It's crazy. And it makes me upset that this topic even matters when it comes to hip-hop, because it makes it seem like everybody in hip-hop is small-minded or stupid—and that's not the case. We've got people like Jay-Z. We've got people like Kanye. We've got people like me. We're all prime examples of people who don't think like that. I treat everybody equal, and so I want to be sure that my listeners and my followers do the same if they're gonna represent me. And if I'm gonna represent them, then I also want to do it in a good way.

The rapper was interviewed by Mr. Porter in February. He told them: