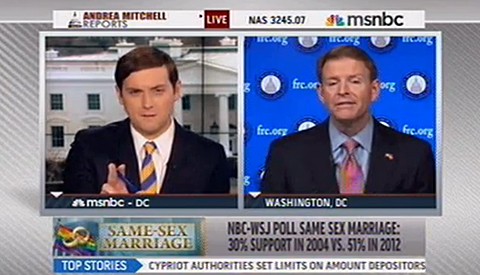 “I don’t fear anything,” Perkins replied.

“Then why do you oppose,” Russert interjected.

“If love becomes a definition of what the boundaries of marriage are, how do we define that going forward?” Perkins asked. He asked, hypothetically, how America would prohibit an individual with multiple spouses from immigrating to the country given that definition of marriage.

“So you equate homosexuality with polygamy?” Russert asked.

“Well, you just said that, sir,” Russert fired back.