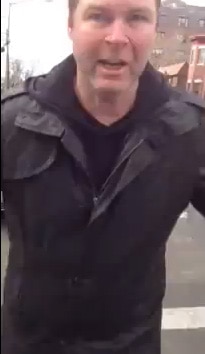 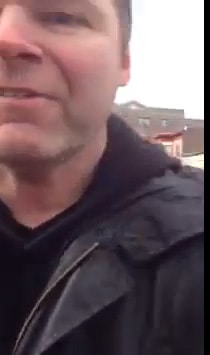 Yesterday, a sidewalk bigot did not get away with calling a gay man a "faggot".

This afternoon, my partner Turtle walked out of our apartment to grab a bite. Before he even left our block, a man called him “faggot” as he passed. Rather than let the guy get away with it, Turtle decided to confront this man about his hateful behavior. And he filmed it.

Notice how well Turtle handles himself in this video. No need to fight hate with hate; calling him “slick hair” is as hateful as Turtle gets (which is hilarious and awesome). He lets that ignorant clown have it with poise and decency. Not surprising, considering Turtle is the absolute best guy around and I couldn’t be prouder of him.

Our neighbors saw this altercation, and told Turtle that this man has been harassing their thirteen year-old son for years, sometimes even calling him “faggot” while the kid was in recess at school with his peers.  They know who he is and where he lives.  They’ve been too scared for the kid’s safety to do anything about it.  But it’s going to end today.

Turtle is going to be filing a complaint today, according to Hartney:

I don’t know what’s going to happen yet, but hopefully this jerk will learn that we’re not going to put up with this crap in our neighborhood anymore. On the bright side, this charmer is already in talks with DC Comics to illustrate Orson Scott Card’s Superman story. It’ll be the first comic book drawn completely in douchey hair gel.

UPDATE: The original video was taken down by YouTube. This is a duplicate, posted at another account.

Previous Post: « Sarah Silverman Will Be Making All Your Videos Now: VIDEO
Next Post: Azealia Banks and Madonna: Screaming Similarities »