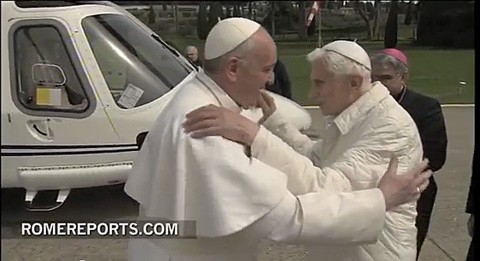 The two popes embraced on the helipad when Francis' helicopter arrived, Vatican spokesman Rev. Federico Lombardi said on Vatican Radio. The two were dressed in white, with Pope Francis wearing a cape and sash to distinguish himself from Benedict, who wore a simple white cassock.

When the duo went to the chapel, Lombardi said Benedict offered Francis the traditional kneeler used by the pope, but Francis wanted the pair to kneel together on the same pew, saying, "We are brothers."

Here's a pool video of their meeting.