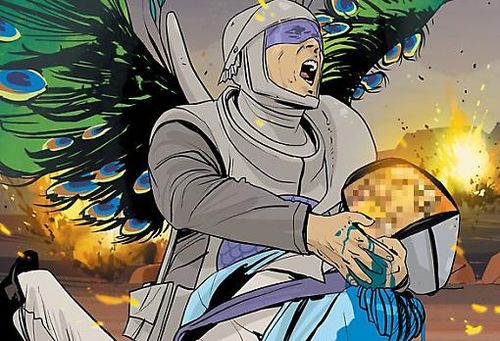 Apple is banning the sale of a popular comic book through any of its iOS devices over two "postage stamp-sized images" of gay sex, while previous issues of the comic which featured larger group scenes of heterosexual sex, sailed through, the New Statesman reports:

The paper adds: "It's hard not to conclude that the rejection is homophobic. Even if it doesn't come from explicitly homophobic guidelines on Apple's part – and the company is notoriously opaque about how its App Store approval process works, so we can't know that for certain – the outcome must be judged on its own merits."

UPDATE: Apparently this was all nonsense:

As a partner of Apple, we have an obligation to respect its policies for apps and the books offered in apps.  Based on our understanding of those policies, we believed that Saga #12 could not be made available in our app, and so we did not release it today.

We did not interpret the content in question as involving any particular sexual orientation, and frankly that would have been a completely irrelevant consideration under any circumstance.

Given this, it should be clear that Apple did not reject Saga #12.

Previous Post: « Nate Berkus and Jeremiah Brent are Engaged
Next Post: NY Jets Bret Lockett: I Don’t Have a Problem with Gay Players »