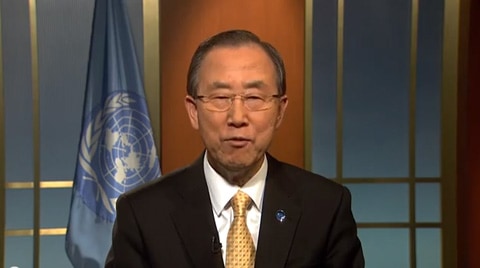 Said the Secretary General in his statement:

We should all be outraged when people suffer discrimination, assault and even murder – simply because they are lesbian, gay, bisexual or transgender. We should all speak out when someone is arrested and imprisoned because of who they love or how they look. This is one of the great, neglected human rights challenges of our time. We must right these wrongs.

Governments have a legal duty to protect everyone. But far too many still refuse to acknowledge the injustice of homophobic violence and discrimination. We need to document this problem and share information with States on a regular basis for discussion and action.

We must institutionalize our efforts to address discrimination based on sexual orientation and gender identity. We need public education to change popular attitudes.

Some will oppose change. They may invoke culture, tradition or religion to defend the status quo. Such arguments have been used to try to justify slavery, child marriage, rape in marriage and female genital mutilation.

I respect culture, tradition and religion – but they can never justify the denial of basic rights.

My promise to the lesbian, gay, bisexual and transgender members of the human family is this: I am with you. I promise that as Secretary-General of the United Nations, I will denounce attacks against you …. and I will keep pressing leaders for progress.

I am committed to leading a global campaign in partnership with the United Nations human rights office. I count on others to join us. Together, we can make the world safer, freer and more equal for everyone.

It is not the first time he has spoken in support of LGBT people. At a UN Human Rights Council hearing on LGBT equality in March 2012, he denounced violence and discrimination, inspiring a walk-out by leaders of Islamic and African nations. He also appeared at a UN panel against homophobia with Ricky Martin last December.