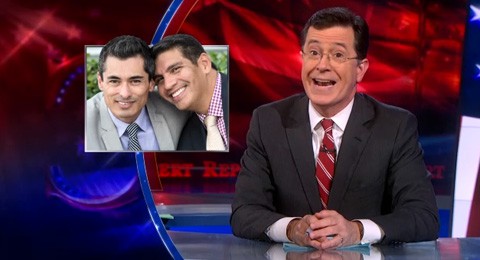 Stephen Colbert highlights Georgia GOP Chairwoman Sue Everhart's recent remarks that gay marriage is not right because same-sex couples "do not have the equipment" for a sexual relationship and that the whole thing is a set-up for heterosexuals who lie about their sexuality to pretend to get gay-married and collect the benefits.

"Yes. A free ride. This entire battle about marriage equality has really been about straight men trying to get free health care. Because if there's one thing I know about straight guys – it's that they will jump at any chance for their peers to think they might be gay… Of course two straight guys getting married for benefits isn't a new scheme. It was blown wide open in the explosive documentary I Now Pronounce You Chuck and Larry…"

Previous Post: « Chicago Bears: We Do Not Support the ‘National Organization for Marriage’ Ruth Institute
Next Post: Gay Reporter Fired from Minneapolis Station After ‘HOMO Dads’ Joke Makes It to Print »