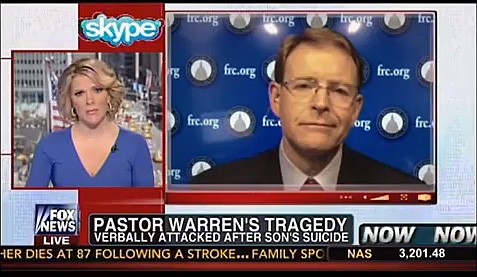 Near the end of a segment about the suicide of Rick Warren's son, FOX News anchor Megyn Kelly turned her attention to the issue of gay rights, and seemed to support hate group leader Tony Perkins' and other religious right hatemongers' assertions that Christians are being victimized and oppressed by those who support equality.

KELLY: A lot of people thought, think, that Pastor Warren is on the wrong side of the gay marriage issue. You can relate to him in this way – not the being on the wrong side, I’m not passing a judgment on that – but you also oppose gay marriage and have been the subject of attacks, and it seems like some, not all, but some of those who want tolerance and acceptance, in their effort to get it, are very willing to pass judgment, alienate, attack, and go about it in a way that may be undermining the very thing they seek.

PERKINS: Absolutely, I think you’re absolutely correct. I mean, just to show a little bit of human compassion to a parent who has lost a child would go a long way in showing that they just want to be accepted and enjoy tolerance.

ADDENDUM: Jeremy Hooper notes how the media should really behave when Tony Perkins is around.