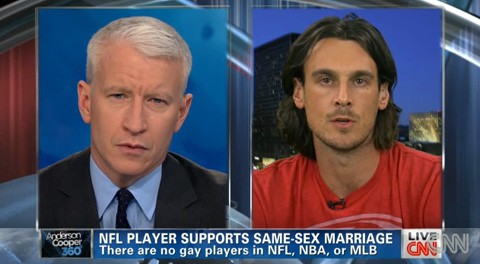 Vikings Punter Chris Kluwe pens a powerful piece on CNN about gay players and whether they would be a "distraction" to a team. Kluwe, typically, does not mince words:

Instead of looking at an openly gay player as a distraction, ask yourselves — how much better would that player play if he didn't have to worry about hiding a core part of who he is? How many more sacks would he have, free of that pressure? How many more receptions? How many more rushing yards?

Fans, media — will an openly gay player be a distraction? Only if you make it one. Only if you insist on denying someone the freedom to live his own life on his own terms, instead of under someone else's control. Stop worrying about who a player dates; worry about his completion percentage, or tackles for loss, or return average. I can promise you, on Sundays the only thing he's worried about is lining up and doing his job to the best of his ability, or else he's going to be cut (just like any of us).

Players — Those of you worried about a gay teammate checking out your ass in the shower, or hitting on you in the steam room, or bringing too much attention to the team — I have four simple words for you. Grow the f*** up. This is our job, we are adults, so would you kindly act like one?

Watch a segment with Kluwe and Anderson Cooper which aired last week, AFTER THE JUMP…

Previous Post: « NFL Pro with Gay Brother Says Gay Player Coming Out Would Not Be ‘Selfish’ or a ‘Distraction’
Next Post: Powerful Open Letter to the Supreme Court from a Gay Couple with Three Adopted Kids: VIDEO »