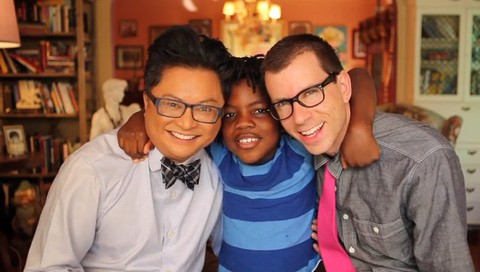 "The documentary will include his stand-up special as well as behind-the-scenes looks at how Alec’s life has changed since he and his husband adopted a child through the foster care system," according to his Kickstarter campaign.

It's not the first time Mapa has been through the kickstarting system. Last year, he and his husband Jamison Hebert and their adopted son Zion starred in Family Restaurant a children's film for gay and lesbian parents, which is on the festival circuit now and was produced via Kickstarter funds.

Said Hebert: “Last year, we had such a great response to fundraising through Kickstarter for 'Family Restaurant.' We wanted to do something even more ambitious this year while continuing to spread the message of foster and adoption by gays and lesbians not only to our LGBT community, but also to the wider world. We know there are many people who want to support a film like this and its timely message.”

And visit their Kickstarter here.