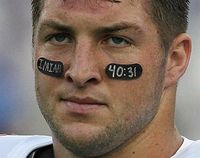 On Monday morning, the Jets cut Tebow with no pomp, a victim of circumstance. They acknowledged an experiment gone awry with a news release that said, simply, “Jets waive QB Tim Tebow.” There was no mention in that release of Tebow’s statistics with the Jets, perhaps in part because there were none worth mentioning.

He was more afterthought than asset, more distraction than revelation, a decoy who played a greater role on special teams than behind center.

"It's unclear where Tebow goes from here."